Companies Collaborate to Accelerate the Adoption of Digital Payments

SAN JOSE, Calif. & SAN FRANCISCO–(BUSINESS WIRE)–Jul. 21, 2016– PayPal(NASDAQ:PYPL) and Visa (NYSE:V) today announced a U.S. strategic partnership that will result in an improved and more seamless payment experience for Visa cardholders and will offer greater choice in how consumers pay with the PayPaland Venmo wallets.

The partnership puts PayPal and Visa on a new path, with the companies working more collaboratively to accelerate the adoption of safe, reliable and convenient digital payments for consumers and merchants. Further, the arrangement is designed to carry significant benefits for issuing financial institutions, acquirers, and merchants. For issuing institutions, these include a better customer experience, more spending volume on their credit and debit cards, lower operational costs, and improved security. Merchants will also benefit from the improved customer experience, efficiency, and security, which together will help drive increased sales.

Details of this agreement include:

“Giving consumers choice in how and where they pay is essential to our goal of being a customer champion and we welcome the opportunity to work with more partners like Visa who share our vision,” said Dan Schulman, president and chief executive officer, PayPal. “This agreement opens new avenues for PayPal to collaborate with Visa, financial institutions, and others in the payments ecosystem to deliver greater value, more choice, and new experiences for our joint customers wherever they transact – online, in-app or in-store.”

“We are excited to begin a new chapter with PayPal. Our agreement provides a framework for our companies to work together collaboratively,” said Charlie Scharf, chief executive officer, Visa. “PayPal has built industry leading capabilities which complement those of Visa and our clients, and working together, we will be able to deliver better solutions for consumers and merchants. At Visa, we are focused on growth by providing our issuer and acquirer clients – and their clients, merchants and consumers – with the best way to pay and be paid everywhere and this agreement supports this approach.”

At PayPal (Nasdaq: PYPL), we put people at the center of everything we do. Founded in 1998, we continue to be at the forefront of the digital payments revolution. PayPal gives people better ways to manage and move their money, offering them choice and flexibility in how they are able to send money, pay or get paid. We operate an open, secure and technology agnostic payments platform that businesses use to securely transact with their customers online, in stores and increasingly on mobile devices. In 2015, 28% of the 4.9 billion payments we processed were made on a mobile device. PayPal is a truly global payments platform that is available to people in more than 200 markets, allowing customers to get paid in more than 100 currencies, withdraw funds to their bank accounts in 56 currencies and hold balances in their PayPal accounts in 25 currencies. For more information on PayPal, visit https://www.paypal.com/about. For PYPL financial information, visit https://investor.paypal-corp.com.

Visa Inc. (NYSE:V) is a global payments technology company that connects consumers, businesses, financial institutions, and governments in more than 200 countries and territories to fast, secure and reliable electronic payments. We operate one of the world’s most advanced processing networks — VisaNet — that is capable of handling more than 65,000 transaction messages a second, with fraud protection for consumers and assured payment for merchants. Visa is not a bank and does not issue cards, extend credit or set rates and fees for consumers. Visa’s innovations, however, enable its financial institution customers to offer consumers more choices: pay now with debit, pay ahead of time with prepaid or pay later with credit products. For more information, visit usa.visa.com/about-visa,visacorporate.tumblr.com and @VisaNews.

The new rate will be the standard rate of 2.9% + $0.30 USD for domestic transactions and 3.9% + fixed fee** for international transactions.  Card-processing rates on PayPal Payments Pro and Virtual Terminal are not changing.

These are the fees posted on Paypal web site now.

Click here for the official Paypal rates and fees. 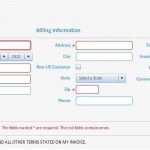 Be wary of sites that list the top 10 best solutions to accept payments online, 10 best payment gateways etc. These sites solicit payment gateway vendors to get on the list. Those who pay the fee get on the list, regardless of whether they’re the best of anything. The vendor checklist below will help businesses that process more than $500,000 annually across all sales channels.

First make a list of needs, then compare to vendor options listed. Because a payment gateway is required for online payments, all questions are specifically for the gateway, regardless of whether the vendor also offers merchant services or check processing.

Where does your business want to accept payments now and in the future?

Do you need level III processing?

How will the solution help automate interchange management, the bulk of processing fees?

If a company offers it, they’ll advertise it because it’s a competitive edge. Probably fewer than 10% offer it. There are many complexities and comparing may be a challenge. For example, if the authorization and settlement amount differ, the transaction will result in additional fees, Unless the solution resolves this difference by obtaining a new authorization. This item can be difficult for merchants to compare from solution to solution, so ask open ended questions.

Do you need online payments for credit cards, ACH or both?

I once had a software company tell me their vendor had promised for years to provide online ACH. They’re still waiting. Shortlist only providers that process what you need now. Custom online payment forms are easy; Certifications for check or credit card processing is not as simple.

How does merchant know when a payment is received?

How does merchant differentiate between online payments and payments key entered by employee or other source?

Are expiring cards managed proactively? Are customers notified in advance to self update?

Can tokens, which replace sensitive card data, be used across all sales channels and or company divisions needed?

Does the transaction occur on merchant server does user click to hosted payment page?

Does it support multi currency processing?

What are customer service communication methods? circle all that apply

This list does not include solutions from companies that are registered ISO of Wells Fargo Bank, N.A., because those are First Data resellers. (The text is found on the bottom of many web sites.)

For Paypal Virtual Terminal and Paypal Payments Pro users it may be time to change vendors. According to Paypal, key entered fees will be increasing to 3.5% April 15. Ecommerce fees will be the same. The only time 2.7% applies is for swiped transactions.

I stand by my earlier comments here http://tinyurl.com/6np9tac . ACH, check, credit all good. So here are some of the negatives regarding the Paypal here release for non-SOHO.
1. Fees. Anyone with sizable volume (let’s just use $1M annually for convenient $ amt) has an effective rate far less than 2.7% all in, even for card NOT present, and we’re talking about retail swipe with this.
2. It’s not actually ready yet. Get on the list.
3. Funding- Paypal transfer to your bank account is currently an inconvenient manual process that takes 3 business days, plus fees are netted per transaction; up to 6 days for checks. Compare to standard merchant account with 1-2 days automatic ACH deposit and fees paid monthly.

No information yet on how this will impact non-profits.

For businesses over $1M in annual processing, contact us for alternative solutions.

PORTLAND, Oregon — February 15, 2012 — Chirpify, the easy way to exchange money via Twitter, today announced the launch of its Twitter Commerce platform, allowing brands and merchants to buy, sell, donate and transact on Twitter. Formerly known as Sell Simply, Chirpify enables direct, or person-to-person, payments and donations in addition to its retail sales platform.

For the first time ever, brands and retailers are able to use Twitter as a direct sales channel. By offering organizations a simple way to turn Tweets into transactions, Chirpify opens up a meaningful new channel that combines social marketing with commerce and offers an easy way for consumers to make purchases.

“Brands, retailers, politicians, celebrities and individuals have spent the past six years using Twitter to build communities and brand affinity, so why not allow them to sell on Twitter directly?” says Chris Teso, founder of Chirpify. “Customers don’t have to leave Twitter to make a purchase or donation. Chirpify removes the frictions of traditional e-commerce check-out processes.”

How it works:
Chirpify integrates directly with PayPal to offer secure transactions on Twitter. Purchases and donations are as simple as replying to a Tweet: “@favoritebrand Buy,“ or “@politician Donate,” for example.

Additionally, Chirpify offers deep integration with existing e-commerce storefronts, including Magento, for back-end fulfillment, listing and transaction management. To use Chirpify, merchants simply click the “list on Twitter” button when drafting an item listing for sale in their e-commerce dashboard. Inbound sales information appears as either an email or as part of the retailer’s back-end system, as well as via a DM on Twitter.

Because it works anywhere Twitter does, Chirpify is device agnostic, allowing any user on any mobile device, tablet or desktop computer to access Chirpify for seamless transactions.

“We identified Chirpify as solving a huge problem in the market: how to monetize social-media efforts,” says Greg Rau, founder and CEO at Upstart Labs. “Chris built an effective and elegant platform to deliver actual ROI based on revenue.  Chirpify offers individuals, companies, organizations—anyone—the ability to monetize their Tweets.”

About Chirpify
Chirpify (www.chirpify.com) is a seamless payment system for Twitter commerce. With full integration to PayPal, Chirpify enables businesses to buy, sell, donate and exchange funds on Twitter, turning Tweets into immediate transactions. Based in Portland, Oregon, the Chirpify platform is the first social commerce system to offer direct monetization through Twitter. To learn more about Chirpify and begin sending or receiving payments today, visit www.chirpify.com.